***DISCLAIMER: THESE WORKS CONTAIN MALE NUDITY*** ARTIST STATEMENT – RICK CASTRO American Photographer known for his work focusing on fetish and desire. He was born in Los Angeles in 1958. Th…

Posted on February 8, 2011 by Mollie Mattsen 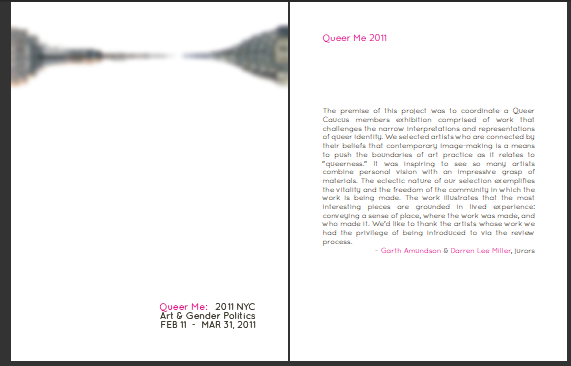 Hey! Guys! Artists! Art-viewers! Check out the link above to see a PRINTABLE PDF of the artists in the show! I’ll link it on the menu bar as well! Artists: The thumbnails in the booklet MAY NOT BE AN IMAGE OF THE WORK YOU SUBMITTED! It’s just to represent your work!

Look for snapshots of the opening reception and the completed exhibition early next week!

Advertisement
Posted in About the Show | Leave a comment

LONDON — For all the talk about one big, globalized art world, the trans-Atlantic gulf reasserted itself the other evening via a small but telling event. An overflow crowd of several hundred people, young and old, men and women, gay and straight, packed Starr Auditorium at the Tate Modern here to pay tribute to David Wojnarowicz, the artist and AIDS activist who died, at 37, from AIDS, in 1992.

Last week, on a visit to Los Angeles, the secretary of the Smithsonian, G. Wayne Clough, was still struggling to account for why he caved two months ago to Republican lawmakers and the leader of the Catholic League, a group that calls itself a defender of free speech. Mr. Clough told The Los Angeles Times that, among other things, fear of retaliatory budget cuts caused him to remove a video by Wojnarowicz from “Hide/Seek,” at the Smithsonian’s National Portrait Gallery in Washington, a show about same-sex themes in American portraiture.

END_OF_DOCUMENT_TOKEN_TO_BE_REPLACED

“Pariah” by Dee Rees at Sundance

At this year’s Sundance Film Festival (Park City, Utah — Jan 20-30), Dee Rees’ film Pariah, a drama about a 17 year old lesbian living with conservative parents and the way she portrays herself differently in front of family and outside of the house.

At the club, the music thumps, go-go dancers twirl, shorties gyrate on the dance floor while studs play it cool, and adorably naive 17-year-old Alike takes in the scene with her jaw dropped in amazement. Meanwhile, her buddy Laura, in between macking the ladies and flexing her butch bravado, is trying to help Alike get her cherry popped. This is Alike’s first world. Her second world is calling on her cell to remind her of her curfew.

END_OF_DOCUMENT_TOKEN_TO_BE_REPLACED

Parenting by Gays More Common in the South, Census Shows

Photo by Sarah Beth Glicksteen for The New York Times.

JACKSONVILLE, Fla. — Being gay in this Southern city was once a lonely existence. Most people kept their sexuality to themselves, and they were reminded of the dangers of being openly gay when a gay church was bombed in the 1980s. These days, there are eight churches that openly welcome gay worshipers. One even caters to couples with children.

More after the jump…

END_OF_DOCUMENT_TOKEN_TO_BE_REPLACED

2/1/11: “A Fire In My Belly” – most recently brought to light by controversy with the National Portrait Gallery, this David Wojnarowicz piece is being screened and followed with a panel discussion.

More event details after the break…

END_OF_DOCUMENT_TOKEN_TO_BE_REPLACED

Pat Robertson: Snow Is God’s Way of Punishing Americans Who Were Planning to Drive to Do Something Gay 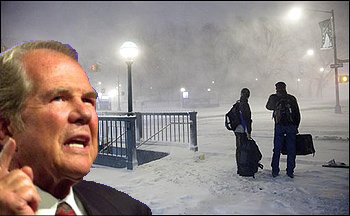 VIRGINIA BEACH (The Borowitz Report) – Rev. Pat Robertson sparked controversy in today’s broadcast of his 700 Club program when he claimed that God created the blizzard currently battering the Northeast “to punish Americans who were planning to drive to do something gay.”

Explaining his theory, Rev. Robertson said, “Because of the bad road conditions the Almighty has made, any gay activities that people were planning on doing will have to be postponed by a day or two.”

Additionally, he argued, God shut down major airports in the New York area “so that people who were hoping to fly to do something of a gay nature would have to take a train or a bus, so it might be days before the gay thing they were going to do could occur.”

As for the millions of straight people in New York City who were also grounded by the bad weather, the televangelist said, “I think God probably wonders, if these people are really straight, then what are they doing in New York?”

In other blizzard-related news, the National Weather Service offered this update: “It’s as white as a Glenn Beck rally out there.”

Due to the holiday season, the deadline for submitting work to the Queer Me 2011 NYC exhibition has been extended to MONDAY, JANUARY 3, 2011.

PLEASE contact us at queerme2011@gmail.com if you have any questions!

In October, a tabloid called Rolling Stone — no relation to the American magazine — published an article headlined “100 Pictures of Uganda’s Top Homos Leak.” The article listed names, addresses and hangouts of gay men and lesbians.

Frank Mugisha saw his photo. Then he noticed the subhead: “Hang them.”

“I was shaken up. I was freaked out. I was scared,” says Mugisha, who heads up the group Sexual Minorities Uganda. “I’m like, hang them? What is the general Ugandan community going to do to us if the media is calling for us to be hanged?”

END_OF_DOCUMENT_TOKEN_TO_BE_REPLACED

WASHINGTON — The Senate on Saturday struck down the ban on gay men and lesbians serving openly in the military, bringing to a close a 17-year struggle over a policy that forced thousands of Americans from the ranks and caused others to keep secret their sexual orientation.

By a vote of 65 to 31, with eight Republicans joining Democrats, the Senate approved and sent to President Obama a repeal of the Clinton-era law, known as “don’t ask, don’t tell,” a policy critics said amounted to government-sanctioned discrimination that treated gay and lesbian troops as second-class citizens.